skip to main | skip to sidebar

Is Culture a Dangerous Concept?

Culture has become a very popular word. When cooperation is bad, we assume cultural differences. When we feel threatened by the power of others, we emphasise our cultural identity. When business negotiations in China fail, it is their culture that made us lose the deal and problems in mergers between companies are the consequence of a failing cultural integration process. Culture explains everything.

The problem of this popular use of the term 'culture' is its highly defensive nature. By blaming the culture, we do not have to take the responsibilty for the conflicts we engage in, the mistakes we make in negotiations and our inability to merge two companies into a new organisation. Culture is to blame.

But what is culture? Is it some solid thing that obstructs our path? Can it be seen? Can it be destroyed or changed? There are no simple answers to such questions, but it is evident that culture - in the form of concepts, rules, recipes, ideas - does shape what people (are able to) do, whereas what people do with these elements in practical situations is not determined by them. People do have the freedom to interpret and change the rules of the game, but they cannot play without rules that are shared to a considerable extent. Culture is an indispensable resource to shape social interactions, which then also becomes a constraint or even a barrier to innovation. To paraphrase the social psychologist Karl Weick: people are like spiders who get stuck in webs of their own making.

So, culture is not just something in our heads that can be changed by thinking differently. It is a social phenomenon: in order to participate in a society you must use rules, concepts, language and so on in a way that others will understand. Culturally competent people know how to do this. This does not mean, however, they are culturally programmed, like a computer that passively uses the instructions of its software. The shared software of the human mind is constantly being rewritten by those who use it.

This brings us back to the 'reified', defensive idea of culture that is now so popular. This denies these processes of interpretation and redefinition in which people change the culture while they are using it to shape their interactions. It denies the degrees of freedom that people have in filling and expanding their cultural space. This can lead to destructive, even dangerous interpretations, including the inevitability of conflict and the impossibility of dialogue. Stereotypical interactions deny the role that people play in creating the cultural conflicts of which they are part and a view of 'culture as a solid thing' does not help to restore the responsibility of the actors for the situation in which they find themselves.

The failure of the 'multi-cultural society' of countries like the Netherlands seems to be related to this theme. The idea of a society consisting of neatly distinguishable 'cultures' with separate ethnic roots creates an illusion of solidity and permanence and reduces cross-cultural communication to communicating across solid walls which themselves are not debatable. While such a strategy of cultural apartheid could be a useful stage in development, it can lead to a dangerous reification of cultural identities. The same would apply to developing managers in global business: if each culture is seen as solid, unchangeable and distinct, cultural development is excluded.

So, we may conclude that culture can indeed be a dangerous concept, if it is coupled to a reifying view of social reality. Viewed differently, however, culture is a creative concept that can help people to find new productive human relationships and build new organisational forms. People from different cultural backgrounds have access to different bodies of 'cultural knowledge', including different sources of 'wisdom'. These resources can be used to create innovative rules of the game in cooperation in business and society. The focus of this cross-cultural cooperation should not be on cultural differences, but on solving problems of cooperation. Maybe the best way to transcend cultural differences is to stop talking about culture.
Posted by Huibert de Man at 04:40 No comments: 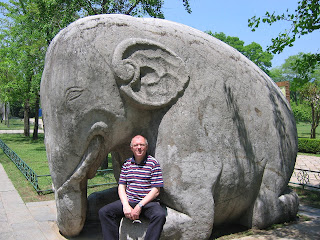 Is China a Collectivist Country?

One of the standard images of the difference between 'Western' culture and 'Chinese' culture is in terms of the dimension collectivism-individualism. The Netherlands would be highly individualistic in these terms and China would be collectivistic. On the basis of this difference it has often been predicted that Chinese will be better team players and cooperate in groups more easily than the Dutch, the Swedes, the Americans. From my own observation, this is not true. (See also http://www.cbiz.cn/NEWS/showarticle.asp?id=2227)
What we often see in Chinese groups - in school, in business - is a very high level of competition between individuals. We also see a a lot of opportunism and low trust. It seems as if each individual person wants to become number one, a process that blocks open communication and cooperation. This very individualistic behaviour seems to be linked to the special type of collectivism in China, sometimes labeled 'vertical collectivism'. In school, in business, in sports, each individual represents his or her own family or group of friends. Loyalty is not primarily to the school, the business or the sports club, but to the own social circle. This pattern is very old: in Imperial China, the impersonal selection system for government jobs created a high degree of competition between families and individuals for the small amount of open positions. In principle, the system was always achievement-based: anyone, poor or rich, could become a civil servant. In practice only those with time to invest in study would have a real chance.

So, is China collectivist? Yes, in a special sense it is, but it combines loyalty to the ingroup with fierce competition and low trust vis-a-vis outsiders, resulting in something Westerners would rather see as individualist, opportunistic behaviour.

So, as Tony Fang from Stockholm university suggests, there are really two contrasting sides of Chinese culture, which are expressed in different contexts, and whose mutual relationship shows a yin-yang logic. On the one hand, there is the Confucian ethic, focusing on harmonious relationships inside the family, inside social groups. On the other hand there are ideas and principles which emphasise personal skill, energy, tactics to deal with opponents, like the Daoist (Taoist) tradition in martial arts, character writing and traditional health practices. Much of the Western literature about China seems to focus on the harmonious, collectivist and 'light' (yang), side of the culture. However, to understand the culture, we must pay attention to the 'dark' (yin) and hidden side of the culture, in personal manoeuvring, tactics and tricks.

A 'monocular' view of China as a collectivist country does not do justice to its 'binocular' culture, where everything can be seen from two points of view.
Posted by Huibert de Man at 12:35 No comments:

Huibert de Man
With a background in sociology I have been active in management education, training and consulting for a long time. Change management, cross-cultural management and management skills are my favourite subjects. I have always had a keen interest in languages and cultures. Teaching management in China, Yemen and Saudi Arabia turned this interest into a central theme for my work: cross-cultural HRM, cross-cultural communication. How people deal with problems fascinates me. I don't believe in imposing simple solutions on complex situations. At the Open University I have contributed to the development of general management education that takes the complexity of management reality as a starting-point. As a freelance trainer, consultant and speaker I continue to help people to deal with the complexity of organization and management.